Recent posts have taken a look at relative market indicators, including those from fixed income and from different stock market sectors.  In this post, we look at the relative performance of international stock markets and what that might be telling us.

The top post charts U.S. large cap stocks (SPY); a broad list of non-U.S. shares from Europe, Australasia, and the Far East (EFA); European stocks (FEZ); and shares from emerging markets (EEM).  All have been set to a value of 100 for the start of 2012 for easy visual comparison.

When all international equity markets are rising, we clearly see indications of global economic expansion.  When performance among international markets is mixed, we see that economic performance is uneven across the globe.  It’s the latter that we are facing presently.

Note how U.S. stocks (SPY) have been strongly outperforming the other international markets.  Indeed, emerging market shares have made relatively little headway over the past three years, and European shares have collapsed in 2014 relative to the U.S.  Given the uneven economic recovery implied by these markets, we now see the U.S. winding down its quantitative easing, even as monetary stimulus has been ramped up in Japan and is being pursued by the European Central Bank.

A result of this relative economic strength and the handoff of monetary easing from the U.S. to the international central banks is that major overseas currencies have been weakening relative to the U.S. dollar.  Indeed, take a look at the bottom chart, which shows how an portfolio consisting of U.S. stocks and short the currencies in the U.S. dollar index has performed since 2012.  Particularly note the recent, near-vertical ascent.  U.S. assets have been massively outperforming those abroad.

What does all this mean?  With weak economic conditions abroad; monetary policy continuing to weaken the yen and euro; and interest rates in the U.S. still meaningfully higher than in Japan and Europe, it is difficult to see what, in the near term, will keep investors away from U.S. assets.  Those macro dynamics are an important underpinning of the significant strength in the U.S. stock market.  Gauging those dynamics by tracking the relative performance of international markets is quite helpful in understanding global macroeconomic shifts 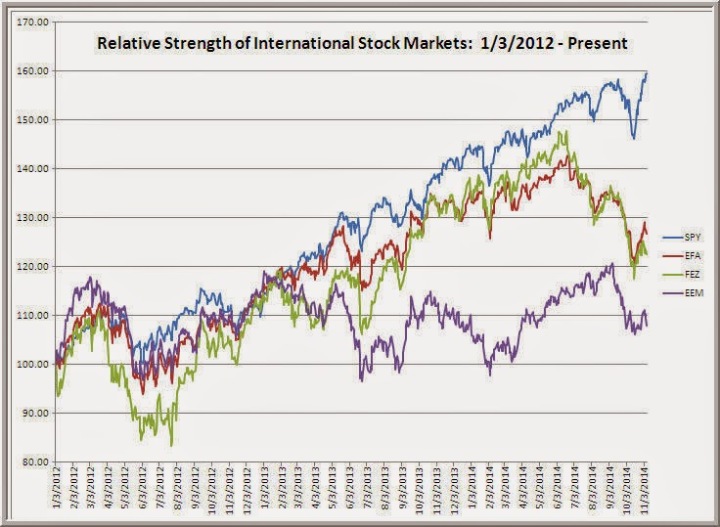